Conversely, nitrogen atmospheric deposition has very little effect on Mediterranean primary production at the end of the simulation period, because most of the basin is not N limited. The study represents the first transient long-term simulations of the Mediterranean Sea with a coupled physical—biogeochemical high-resolution model.

It provides a first glimpse of the sensitivity of the Mediterranean Sea biogeochemistry to climate change and to the evolution of external nutrient fluxes. As for all modeling studies, our conclusions are subject to some limitations that we attempt to underline in this section.

This influence is mainly linked with the evolution of stratification index and vertical mixing. Overall, the increase in stratification in our A2 climate change scenario leads to different evolutions of nutrient concentrations between the surface and the intermediate and deep waters, with surface waters becoming more sensitive to external nutrient sources Figs. Our study is thus only a first step for transient modeling of the Mediterranean Sea biogeochemistry. Freshwater runoff in the physical model may also influence the circulation and nutrient concentrations at the river mouth.

This decrease may result in higher nutrient concentrations at the river mouth. Nutrient concentrations in the intermediate and deep layers were underestimated in comparison to measurements see Appendix. The low riverine discharge and the imbalance in sources and sinks explains the loss of nitrate in the CTRL see Figs. Organic forms of nutrients are not directly available to phytoplankton in this version of PISCES and are not included in our nutrient budgets. Therefore, we appear to be missing part of the N and P budgets in our calculations. Model values were not corrected to match data, hence, the uncertainties in the representation of present-day biogeochemistry by the PISCES model may be propagated into the future.

Moreover, changes in nutrient balance influence the nutrient limitations as shown by Fig. Yet, the results simulated with the Redfieldian hypothesis are coherent with the observed variations of nutrient supply to the Mediterranean Sea and yield realistic biological productivity. Nonetheless results concerning nutrient limitation could change in a non-Redfieldian biogeochemistry model.

Climate change may impact all drivers of biogeochemical cycles in the ocean. Nutrient fluxes from external sources rivers, aerosols, and fluxes through the Strait of Gibraltar may evolve separately depending on future socioeconomic choices and climate feedbacks. It is important to accurately represent the incoming nutrient fluxes to the Mediterranean and their potential evolution with regards to climate change, as they have important influence on the Mediterranean Sea biogeochemistry. Fluxes through the Strait of Gibraltar.

Therefore, there is no incompatibility issue between for the forcing and model. Riverine nutrient fluxes. Associated discrepancies and the uncertainties linked with the use of inconsistent scenarios in our simulation should be addressed by developing a more integrated modeling framework to study the impacts of climate change on the Mediterranean Sea biogeochemistry.

This scenario has the advantage of being derived from a coherent modeling framework. Moreover, according to these authors, the socioeconomic decisions made in the 21st century will influence nitrate and phosphate discharge over the Mediterranean. It is difficult to forecast these decisions, and the resulting changes in nutrient fluxes are uncertain. Potential effects of aerosol deposition.

However, there are multiple sources of aerosols that are not included in atmospheric models, e. Their combined influence could perhaps constitute an important nutrient flux to the Mediterranean, thus altering the evolution of its biogeochemistry. Thus, efforts should be made to accurately represent this nutrient source in Mediterranean models to assess the effect on Mediterranean Sea biogeochemistry with regards to climate change.

These results suggest a substantial accumulation of nitrogen in the Mediterranean basin over the century when phosphorus fluxes can be considered roughly stable. The strong decrease in sedimentation Fig. 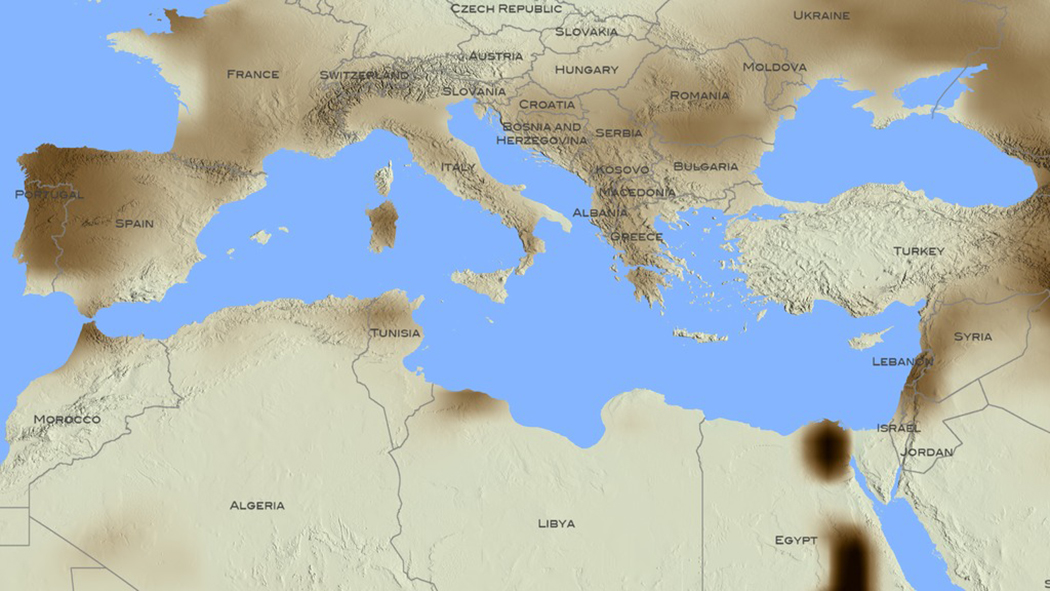 Results from our different control simulations indicate the extent to which the choice of the biogeochemical forcing scenario may influence the future evolution of the Mediterranean Sea biogeochemistry. Both studies found that chlorophyll concentration and plankton biomass increase slightly due to changes in vertical stratification. However, our transient simulations revealed nonlinear trends in plankton biomass evolution as a result of the influence of external nutrient fluxes.

Our results appear to agree, showing signs of trophic amplification see Figs. Assessing the sensitivity of the Mediterranean to trophic amplification would require more simulations focused on the evolution of Mediterranean planktonic biomass under different climate change scenarios. This definition of nutrient co-limitation applies well to the Mediterranean case because of its very low nutrient concentrations. Therefore, a part of the nutrient accumulation we observed may be linked with the increase in temperature.

This study aims at assessing the transient effects of climate and biogeochemical changes on the Mediterranean Sea biogeochemistry under the high-emission SRES-A2 scenario. Hence, it appears reasonable to use it to study the future evolution of the biogeochemistry of the Mediterranean basin in response to increasing atmospheric CO 2 and resulting climate change. Its results illustrate how future changes in physical and biogeochemical conditions, including warming, increased stratification, and changes in Atlantic and river inputs, can lead to a significant accumulation of nitrate and a decrease in biological productivity in the surface, thus affecting the entire Mediterranean ecosystem.

Our results also illustrate how climate change and nutrient inputs from riverine sources and fluxes through the Strait of Gibraltar have contrasting influences on the Mediterranean Sea productivity. In particular, the biogeochemistry in the western basin displays similar trends as that for nutrient input across the Strait of Gibraltar. Therefore, it appears critical to correctly represent the future variations of external biogeochemical forcings of the Mediterranean Sea, as they may have an equally important influence on surface biogeochemical cycles as climate.

The biogeochemistry of the eastern basin is more sensitive to vertical mixing and river inputs than the western basin, which is regulated by input through the Strait of Gibraltar. Increased future stratification also reduces surface productivity in the eastern basin. Although this study does account for the changes in fluxes through the Strait of Gibraltar and riverine inputs, some potentially important sources are missing, such as direct wastewater discharge, submarine groundwater input, and atmospheric deposition. These additional nutrient sources are poorly known, with a general lack of both measurements and models as needed to build comprehensive datasets for past and future evolution of these nutrient sources.

Although these atmospheric fluxes have been evaluated previously and were shown to correctly represent the deposition fluxes, there is no guarantee that these fluxes will remain constant over the next century. Results indicate that the future sensitivity of the Mediterranean to atmospheric deposition depends on the surface nutrient limitation, which may in part be influenced by aerosol deposition. However, there is, to our knowledge, no available transient scenario for the 21st century evolution of atmospheric deposition and no ensemble simulations to assess the future evolution of the Mediterranean Sea under different climate change scenarios.

These models include a representation of the ocean, atmosphere, aerosols, and rivers and could eventually be used to make consistent future climate projections at the regional scale of the Mediterranean. Comparison with in situ observation provides more refined estimates. Colors represent individual years. The overestimated DCM depth may be due to the overestimation of nitracline and phosphaline as shown by Fig.

The vertical distribution of nitrate and phosphate concentrations along a west-to-east transect is shown in Fig. The model produces the salient west-to-east gradient of nutrient concentrations. Concentrations in the surface layer appear realistic. All authors participated in results interpretation and manuscript correction JCO corrected the English. Edited by: Jean-Pierre Gattuso Reviewed by: three anonymous referees.

The analysis of social data revealed that local residents are aware of climate change impacts and risks, but this is not currently translated into preventive and protective actions. Bleta et al. This is meant to provide a framework for considering the effects of climatic conditions on human beings and to help stake holders to make any necessary adaptations and become more resilient to the foreseen climate change. Grapes, olives and wheat are economically very important and typical Mediterranean crops.

Lereboullet et al. Further, summer precipitation is highly variable and very low, and projections suggest greater uncertainty and more extreme drought events in the future. The authors have analyzed the roles of non-climatic factors in the generation of vulnerability for Mediterranean agricultural systems facing rapid climate change and show that Mediterranean viticulture could suffer from hotter and drier growing seasons over the coming decades. Authors highlight the importance of considering both regional average impacts as well as the variability in crop productivity in setting priorities for the adaptation and maintenance of rural incomes.

Lionello et al. The evolution of these seasonal climate variables in the first half of the twenty-first century could decrease wine production and, to a lesser degree, harvested olives, but has a negligible effect on harvested wheat. This special issue presents a set of new studies covering different topics that are included among the MedCLIVAR general scientific objectives. The articles show that past climate reconstruction remains a great opportunity and an important challenge.

Further they document progresses that are being achieved on further characterization of internal climate variability, with an emphasis on extreme events. Articles show that systematic recovery and analysis of in situ observations at subregional scale, such as those provided by rain gauges, represents an important contribution and remains an incomplete task in many areas. Comparison among different model simulations and among statistical and dynamical downscaling methods is used for identifying robust regional features among different climate projections and for a systematic analysis of agreed and controversial points.

Finally, contributions show how it is possible to use climate projections to derive the impacts of climate change on the environment, tourism, and agriculture. Skip to main content Skip to sections. Advertisement Hide. Download PDF. The climate of the Mediterranean region: research progress and climate change impacts.


Editorial First Online: 17 August Introduction This special issue was proposed at the second MedCLIVAR conference which was held in Madrid, Spain, 26—29 September and has received a wide range of contributions covering different and complementary topics: paleo-climate, present climate variability and trends, extremes, climate projections, and impacts of future climate change on the regional environment and societies.

In: Lionello P ed The climate of the mediterranean region: from the past to the future. Elsevier, Amsterdam, pp 1— Reg Environ Change. Global Planet Change — In: Navarra A, Tubiana L eds Regional assessment of climate change in the Mediterranean, advances in global change research —, Springer, Netherlands. In: Lionello P et al. Elsevier, pp — ISBN Lionello P a The climate of the Venetian and North Adriatic region: variability, trends and future change. Lionello P Ed. Elsevier, pp Global Planet Change. Elsevier, pp xxxv—xc. Elsevier, pp 87— This session encourages contributions adopting a multidisciplinary approach and it aims to promote a dialogue between climatologists and researchers interested on the impacts of climate on human and natural systems.

It aims at including contributions describing new scientific findings on the climate of the Mediterranean region, its dynamics, variability, change, and studies of climate related impacts on societies and ecosystems. The session considers different time scales from paleoclimate to future model projections , different components atmosphere, ocean, land and its hydrology and factors chemical, biological, anthropic as well as highlights of sub-regional hotspots and climate processes.